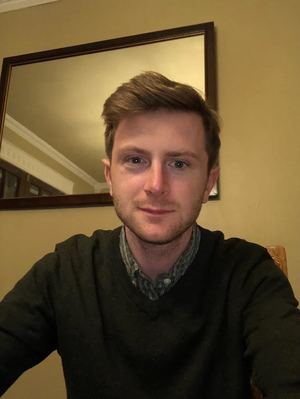 Area(s) of Interest: ‘Christianization’ of the Roman Empire; Christianity and classical culture; Neoplatonism

A Los Angeles native, John Ladouceur graduated summa cum laude from UCLA in 2017 with a B.A. in History. As an undergraduate, he participated in the excavation of a 5th-century C.E. synagogue in Israel’s Lower Galilee region and assisted site historians Ra’anan Boustan and Karen Britt in research for their book The Elephant Mosaic in the Synagogue at Huqoq: Official Publication and Initial Interpretations (Journal of Roman Archaeology 2017). While serving as president of Theta Upsilon, UCLA’s chapter of the Phi Alpha Theta History Honor Society, he published his paper “Christians and Pagans in Roman Nea Paphos: Contextualizing the ‘House of Aion’ Mosaic” in UCLA’s graduate historical journal. He is interested most broadly in the ‘Christianization’ of the Roman Empire, and especially with pagan-Christian relations from the 2nd to 4th centuries. Some of his current areas of research include: the Greek and Latin apologists; early Christian historiography and theories of culture; Neoplatonism and its politico-cultural implications; the emperor Julian ‘the Apostate’. In his free time, he enjoys backpacking the National Parks and chronicling Southern California’s local history and culture.