Presenting new archaeological studies from recent fieldwork, this volume throws new light on the archaeology and history of the Pavllas River Valley, the Mediterranean alluvial plain in the territory of Butrint, ancient Buthrotum, in southwestern Albania. It gives prominence for the first time to two important sites, Kalivo and Çuka e Aitoit, which are here reinterpreted and shown to have played major roles in the early history of Butrint as it evolved in the later first millennium BC to emerge as the key city of Chaonia in Epirus. Butrint 7 also presents the full excavation report of the Late Bronze Age and Hellenistic fortified site of Mursi, in addition to other archaeological surveys and excavations in the hinterland of Butrint, including the Roman villa maritima at Diaporit, the villa suburbana on the Vrina Plain, and Roman sites on Alinura Bay and at the Customs House, as well as new surveys of the early modern Triangular Fortress and a survey to locate the lost Venetian village of Zarópulo. It also includes a new study of the Hellenistic bronze statuette of Pan found on Mount Mile and of his sanctuary at Butrint. The volume concludes with a comprehensive reassessment of the Pavllas River Valley in relation to Butrint, from the Palaeolithic to the modern eras, examining how dominion, territory, environment and the ‘corrupting sea’ reshaped Butrint and its fluvial corridor diachronically and particularly brought profound territorial, economic and social alterations under the Roman Empire.

Augustine’s commentaries on Psalm 61-70 are mostly based on sermons. In this edition, a special emphasis was laid on the adequate presentation of Augustine’s expressive and nuanced oral style. Each commentary is accompanied by an introduction, in which the known facts on time, date and liturgical circumstances are presented, as well as a precisely reconstructed version of the text of Augustine’s Psalter(s).…

Two thousand years ago, Rome was the capital of an empire stretching across the Mediterranean, from England, Spain and North Africa to Turkey, Iraq and Egypt. Built from the wealth of its expansive dominion, it was the greatest metropolis on earth, at the center of a vast web of interconnected regions and cultures. The city has remained the focus of the Catholic Church and Christianity in Europe for more than 1500 years.

Dale Parker, Classics Alumnus (2013), is currently in his first year of his ecclesiastical doctorate in Theology at Pontifica Università della Santa Croce in Rome.  …

We cordially invite applications for the Eli J. and Helen Shaheen Professorship in Classics at the University of Notre Dame, to begin July 1, 2020. We welcome applications from Hellenists to be hired at the rank of Associate or Full Professor (with tenure), particularly those who specialize in Greek poetry of the Archaic or Classical periods or who would otherwise complement existing departmental strengths. Applicants are required to have a Ph.D. or equivalent and should already have significant records of publication, teaching, and service. Strong applications from candidates currently at the rank of Assistant Professor will also be considered. Applicants should be prepared to teach undergraduate and graduate courses in Greek language and literature, and to offer courses in classical literature and culture in translation. The teaching load is two courses per semester.…

In this class, ancient texts and recent movies will introduce us to the lives of these ancient heroes and heroines, from Achilles through to Luke Skywalker. By studying them we will come to understand their ideals and ambitions, and compare them to our own ideals and ambitions. This class will raise this and similar questions. Finally, in the last part of the class, we will compare these heroes and heroines with Christian heroes, such as Dante in the Divine Comedy…

We congratulate Elisabetta Drudi, an alumna of the Classics MA program, who successfully defended her PhD dissertation in Literature on April 3.

Latin has "all the pleasures of a puzzle, a time capsule and a secret code."

Congratulations to Josh Noble, alumnus of the MA in Early Christian Studies program and current Ph.D. student in the Department of Theology, for successfully defending his dissertation and receiving the Shaheen Award in the Humanities this week.

Congratulations to our senior thesis writers, who presented their work to the department last Friday.

Dr. Franz Fischer, associate director of the Cologne Center for eHumanities, will be visiting the University from February 5 through 15 as part of the ongoing project in the Digital Schoolbook.

Over winter break, four Notre Dame graduate students and alumni attended the Winter School in Paleography and Codicology at the American Academy in Rome, led by Dr. David Gura.

This December, the Department of Classics and Classics Club celebrated the end of the fall semester with their annual Saturnalia party.

The 114th Annual Meeting of The Classical Association of the Middle West and South (CAMWS) will take place April 11-14, 2018, in Albuquerque, New Mexico. The event will feature no less than five members of the Notre Dame Department of Classics – four graduate students and one faculty member.

Last week, the Department of Classics and Classics Club hosted a soccer game where the faculty and graduate students faced off against the undergraduates.

"The ability of the Greeks and Romans to innovate and create these advanced societies is so captivating, and their ancient world has influenced our own modern practices in ways that are impossible to overlook."

In early October, the Department of Classics and Classics Club of Notre Dame went to see Orphée et Eurydice, performed at the Lyric Opera of Chicago featuring the Joffrey Ballet.

Check out the new course offerings from the Department of Classics for Spring 2018!

"For all of those who may think that Chemistry and Classics have nothing to do with each other, we hope to change your mind!"

On October 21, the Notre Dame Classics Club and college football—two essential Notre Dame institutions—will come together, as Notre Dame faces off against the USC Trojans.

An ancient city was recently discovered in the Qalatga Darband settlement in Iraq and is thought by some to be a "Lost City of Alexander the Great." Professor Christopher Baron weighs in on the controversy in this excerpt from an article in the Daily Beast.

"In the spring of my junior year, I studied abroad at the ICCS in Rome, and I was able to put my study of Classics in its context. When I had class on site, it unified what I had learned in my Latin and archaeology courses. Nothing compares to discussing Roman topography while in the Roman forum."

Faculty, students, and friends of Department of Classics and the Program in Arabic and Middle Eastern Studies enjoyed an opening reception at the home of Brian and Joan Krostenko.

Call for Submissions for CAMWS, 2018 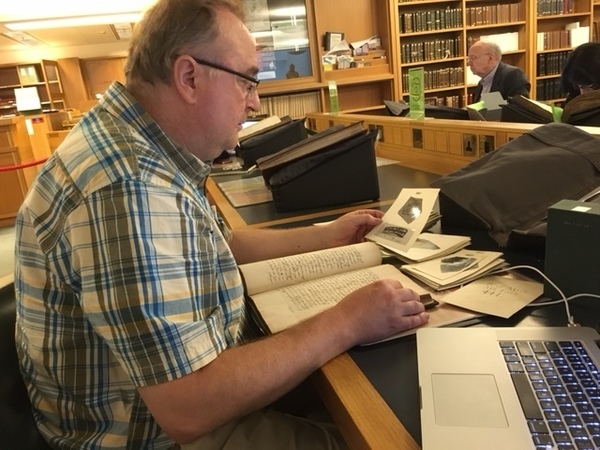