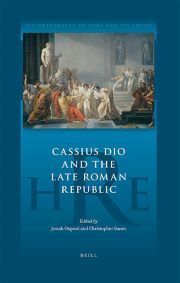 Cassius Dio’s Roman History is an essential, yet still undervalued, source for modern historians of the late Roman Republic. The papers in this volume show how his account can be used to gain new perspectives on such topics as the memory of the conspirator Catiline, debates over leadership in Rome, and the nature of alliance formation in civil war.

Contributors also establish Dio as fully in command of his narrative, shaping it to suit his own interests as a senator, a political theorist, and, above all, a historian. Sophisticated use of chronology, manipulation of annalistic form, and engagement with Thucydides are just some of the ways Dio engages with the rich tradition of Greco-Roman historiography to advance his own interpretations.