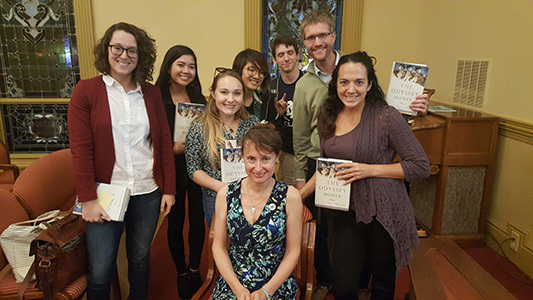 Drs. Amy Pistone and Aldo Tagliabue and graduate students, Maria Ma, Allie Roos and Melody Wauke, from the Department of Classics MA program attended a talk by Dr. Emily Wilson at Franklin College, Franklin, Indiana.  Dr. Wilson teaches in the Department of Classical Studies at the University of Pennsylvania, and is Chair of the Program in Comparative Literature and Literary Theory. She is the first woman to translate Homer’s Odyssey into English, which was published in November 2017.

Her other works include The Death of Socrates, 2007, and a new translation of selected tragedies by Seneca, 2010. She is also the Classics editor of the Norton Anthology of Western Literature, 2013, and the revised Norton Anthology of World Literature, forthcoming later this year. She published The Greatest Empire: A life of Seneca, in 2014, and four translations of plays by Euripides in the Modern Library The Greek Plays (2016).

Her work has been lauded and its significance discussed just about everywhere (from NPR to the New York Times to The Guardian and The TLS). Her talk focused on translating the Odyssey, and touched on subjects like history, language, gender, violence, and storytelling, among others.

The event included a reading, question and answer period and book signing.