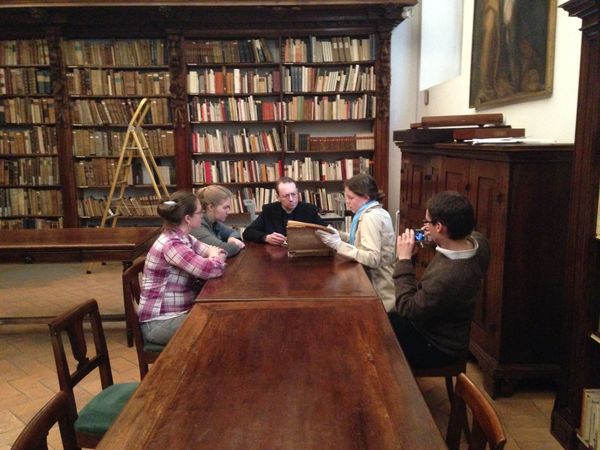 This spring, Professor Hildegund Müller’s Introduction to Medieval Latin course travelled to Milan to study manuscripts at the Biblioteca Ambrosiana. Their visit offered the opportunity to not only handle manuscripts and codices in person, but also explore the historic city and its culture.

The trip was planned in connection with the course’s final project. Each student was assigned a manuscript from the Biblioteca Ambrosiana to study, transcribe, translate, and analyze in a written commentary, using microfilms from the Hesburgh Library’s collection. Visiting Milan was the culmination of their research efforts, allowing them to study their manuscripts firsthand without the limitations that the microfilms imposed.

For M.A. student Andrea Odegaard, the most important advantage was observing her manuscript’s construction. “In learning how the folios of my manuscript were compiled and sewn together,” she said, “I learned how the different diverse books within the manuscript were organized, and that some sections were perhaps unique to the manuscript.” Ph.D. student Emily Mahan was impressed by the different visual effect her manuscript had in person. “There was the fact that at some point, throughout the first alphabetical section, a helpful unknown scribe had put red catch-words for each entry on the right-hand side,” she said. “These stood out boldly and were easy to run one’s eye across—but they were, of course, just a shade of gray on the microfilm.”

Don Federico Gallo, director of the Biblioteca Ambrosiana and scholar of paleography, also offered a private seminar for students to talk about the library’s codices. 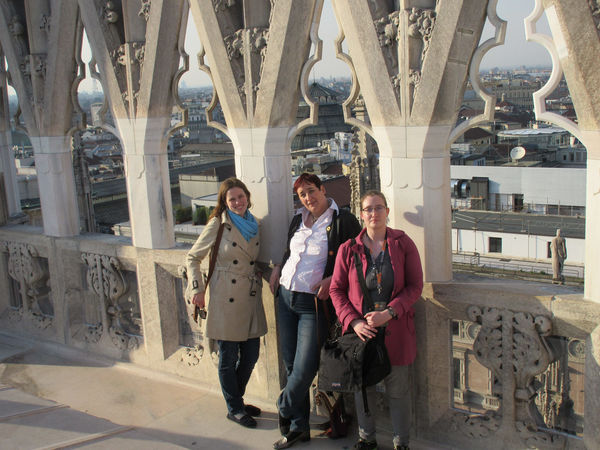 In addition to examining manuscripts, the class spent time exploring the city. Don Federico Gallo gave a guided tour of his favorite churches, restaurants, and landmarks in the area, and the group explored on their own as well. The most interesting sights included the Duomo di Milan, the Castello, the University of Milan, and the Battistero, where St. Ambrose baptized St. Augustine.

Ultimately, the students agreed that the trip was rewarding both on an academic and on a personal level. Ph.D. student Mihow McKenny summarized their week in Milan as “an unsurpassed opportunity for appreciating man’s ‘recreation’ of nature, and for reminding ourselves, via the cultural, literary, and architectural achievements surrounding us, of the endless potential of the human being.”

The trip was made possible through the Ambrosiana Grant in the Program of Italian Studies, the Nanovic Institute’s Teaching Beyond the Classroom Grant, the Department of Classics, the Medieval Institute and the Early Christian Studies Program.