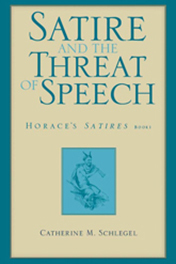 In his first book of Satires, written in the late, violent days of the Roman republic, Horace exposed satiric speech as a tool of power and domination. Using critical theories from classics, speech act analysis, and other fields, Catherine Schlegel argues that Horace’s acute poetic observation of hostile speech provides insights into the operations of verbal control that are relevant to his time and to ours.