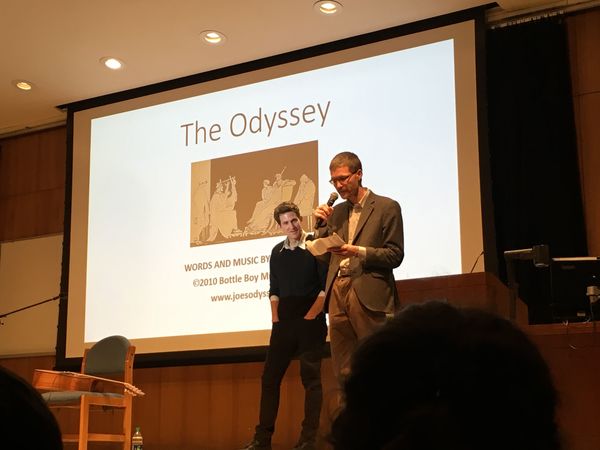 In early February, singer-songwriter Joe Goodkin visited Notre Dame to perform a folk opera of Homer's Odyssey for Professor Aldo Tagliabue's Ancient Heroes class and later for the Department of Classics and Classics Club. Drawing on the oral tradition behind the Odyssey, he performed his own musical interpretation of the Homeric story, with a particular focus on identity and relationships.

At the end of the performance, Mr. Goodkin opened up the floor to questions, comments, and even criticisms. He explained his journey to becoming a modern-day bard, his song-writing process, and the decisions behind the episodes he chose to include from the 24-book epic. Ultimately, as his blog post about the event summarizes, it's the "wonder" of the story that inspires him in his own personal odyssey, both across the country and as an artist.

This event was generously made possible by the Teaching Beyond the Classroom grant. Special thanks also to Professor Tagliabue and the Classics Club for organizing the visit.