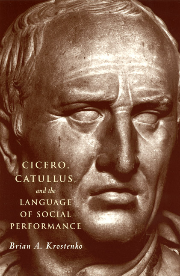 Charm, wit, and style were critical, but dangerous, ingredients in the social repertoire of the Roman elite. Their use drew special attention, but also exposed one to potential ridicule or rejection for valuing style over substance. Brian A. Krostenko explores the complexities and ambiguities of charm, wit, and style in Roman literature of the late Republic by tracking the origins, development, and use of the terms that described them, which he calls "the language of social performance."