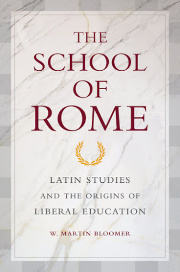 This fascinating cultural and intellectual history focuses on education as practiced by the imperial age Romans, looking at what they considered the value of education and its effect on children. W. Martin Bloomer details the processes, exercises, claims, and contexts of liberal education from the late first century b.c.e. to the third century c.e., the epoch of rhetorical education. He examines the adaptation of Greek institutions, methods, and texts by the Romans and traces the Romans’ own history of education. Bloomer argues that whereas Rome’s enduring educational legacy includes the seven liberal arts and a canon of school texts, its practice of competitive displays of reading, writing, and reciting were intended to instill in the young social as well as intellectual ideas. University of California Press, 2011