Tom Hite '16 is a graduated Classics Major hailing from Leeds, ME. Tom has loved Classics since 4th grade and has taken advantage of some of the excellent opportunities Notre Dame offers. In his junior year Tom spent eight months in Europe on three different ventures all funded and accessed through the Department of Classics and Notre Dame.

Following the spring semester of his sophomore year, he went home to Maine for four days before traveling to Albania to work with Professor David Hernandez on his archaeological excavation of the ancient Roman colony at Butrint. He left Albania June 12th and headed West to Rome, where he worked in the Vatican Museums for the Patrons of the Arts, an International Organization devoted to fundraising and restoration of the works within the Museums. Tom returned to the States Mid August to acquire his Visa, and then returned to Rome for the Fall semester to study at the Intercollegiate Center for Classical Studies.

Back at Notre Dame during his senior year, Tom wrote his thesis on Greek religious beliefs from the 2nd century BC to the 1st century AD. He was also President of the Classics Club of Notre Dame and worked as the student assistant in the Department of Classics. He is currently pursuing an MA in Classics at Washington University in St. Louis.

To read more about Tom's adventures on two continents and in four countries, check out his travel blog! 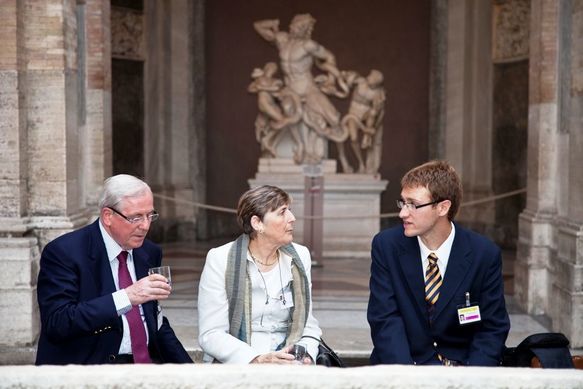