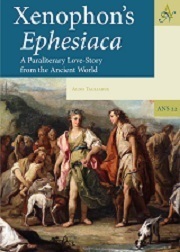 Among the five fully extant Greek novels, the Ephesiaca occupies the position of being an anomaly, since scholars have conventionally considered it to be either a poorly written text or an epitome of a more sophisticated lost original. This monograph challenges this view by arguing that the author of the Ephesiaca is a competent writer in artistic control of his text, insofar as his work has a coherent and emplotted focus on the protagonists’ progression in love and also includes references to earlier texts of the classical canon, not least Homer’s Odyssey and the Platonic dialogues on Love. At the same time, the Ephesiaca exhibits stylistically an overall simplicity and contains many repetitions; these and other features make this text different from the other extant Greek novels. This book explains this difference with the help of Couégnas’ view of ‘paraliterature’, a term that refers not to its status as ‘non-literature’ but rather to literature of a different kind, that is simple, action-oriented and entertaining.