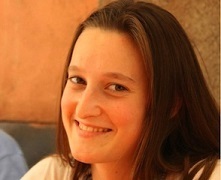 Ann Gallagher is a senior classics and PLS double major who has had some amazing experiences abroad.

During her sophomore year, Ann participated in the Paideia Institute's Program, Living Latin in Rome. This five week program has students read the most important Latin texts from the ancient times all the way to the modern era. Each text selected is linked to an important physical monument or place in the city of Rome, which the program visits on scheduled weekly site visits. The program’s goal is to provide an intensive and continuous period of study of Latin while helping participants form strong emotional connections with Latin literature and culture. Ann was funded by the Nanovic Institute, and wrote an interesting travel blog detailing her adventures.

In her junior year, Ann was awarded the Monteverdi Prize from PLS, which she used to travel over the summer. She attended Notre Dame's conference on the Vatican Collections, researched Pomponius's Versus ad Gratiam Domini from the Vatican Collections, worked in Monteverdi, and led a summer seminar on the Aeneid, all within a six week period. Her research centered around the written and artistic tradition of Christians such as Constantine and St. Augustine, who interpreted Virgil as a Christian prophet. She is currently writing her senior honor thesis, called "Baptizing Virgil," about a Biblical epic called the "Carmen de Iona Propheta" and the ways in which this genre makes use of classical epic - particularly Virgil's Aeneid.